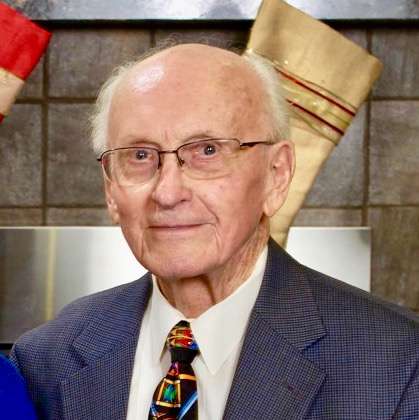 Paul Golden Holsted passed away on Wednesday, September 28, 2022, just 33 days before his 100th birthday. Paul was born on October 31, 1922, in Southampton, England. At the time, his parents who were medical missionaries had stopped in Southampton while in transit to India for their first term. Their stopover in the UK was to provide Paul’s father education in treating tropical diseases. Paul was the only boy and he had three younger sisters all who were born in India. In India, he attended a Christian British school, graduating in 1938. After returning to the US in 1939, he attended Wheaton College in Illinois where he graduated in June of 1943 with a degree in physics and math. Paul did post graduate work at Ohio State University until early 1944. In April 1944, Paul learned of a secret government project underway at the University of California in Berkeley and moved to Berkeley where he worked on a project for developing a method to create uranium that would be needed for the war effort. At Berkeley he was drafted into the US Army Corps of Engineers. In the fall of 1944, the Army transferred him to Oak Ridge, Tennessee to continue with the same program but on a mass production scale. Following the war, in 1945, he relocated to Richland, Washington where he started working on
plutonium production and peacetime uses for atomic energy at nearby Hanford. While at Oak Ridge, he met Elsie Jones from Liggett, Kentucky who was also working on the same project. They were married in December 1945, and settled in Richland, Washington. Paul retired in 1978 and he and Elsie traveled extensively including an 80-day trip around the world. Elsie passed away in 1982. In 1985 Paul married Maxine Cashion and moved from the northwest to Huntington Beach, California. They traveled to Europe on several occasions and enjoyed cruise vacations. Maxine passed away in November 2007 at the age of 100.
Paul is survived by two sons, both born in Richland, Washington. Alan (Clare Sutton) lives in Gresham, Oregon and Larry (Jacalyn Bertsch) lives near Issaquah, Washington. Alan and Clare have two children: Kimberly Dawn and Jeremy Alan. Larry and Jacalyn have a daughter, Courtney Anne. Other survivors include Maxine’s son, Bob Cashion (Sandy Anderson), who live in Manhattan Beach, California and her daughter, Maurine (Jim Dobkins), in Kingwood, Texas, near Houston.
Paul accepted the Lord as a boy in Ongole, India and he and his three sisters were all baptized at the Jewett Memorial Baptist Church in Ongole. Throughout his adult years, he was active in his local church, leading the choir, teaching Sunday school, and taking on other leadership
roles. He took his family on many camping trips while his boys were growing up. This was probably what instilled a love of hiking and the great outdoors in them.
In 2016, Paul moved to Gresham, Oregon to be closer to his kids and lived at Courtyard Fountains. At Courtyard Fountains, Anne Whitlock gave him the nickname “Sir Paul” after Paul McCartney. He attended Good Shepherd Community Church and was involved in a growth group and Prime Movers class where several people called him “Sir Paul.”