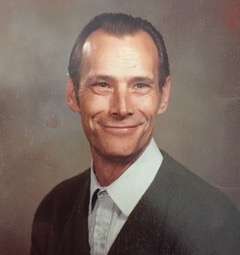 Neil entered heaven peacefully at his son’s home on July 4th at the age of 87. The last song we sang to him was God Bless the USA by Lee Greenwood.
Neil was born on November 7, 1932 to Kenneth & Evelyn Hagen. He was born in Salem and raised in Canby Oregon where he graduated from Canby High School.

Neil served his country in the Army from February 1953 until February 1955 – 2 years active duty and 6 years of Army Reserve.

Neil married Audrey on August 9, 1953 in Stevenson Washington. Following their marriage, they lived in Milwaukie, Oregon for 15 years. In 1967, they moved to Gresham and remained in East County. They were blessed with 50 years together.

During his life Neil owned Neil’s Printing Service. He worked hard and provided for his family. He later sold the business to his son Michael. He bowled for the Elks Lodge for a number of years. He coached his sons baseball teams. He also enjoyed attending sporting events with his daughter Denise. He enjoyed traveling with Audrey and attending his grandchildren’s school and sporting events. He attended Lighthouse Community Church into his eighties. Neil accepted Jesus as his Savior later in life and enjoyed studying the Bible. He enjoyed fishing with his sons and that legacy has lived on with his grandchildren. He loved listening or watching the Blazers – he was upset when their season was cancelled.

Neil is survived by his children: Michael (Val) of Portland OR, Denise Denton of Dixon IL, Dan of Vancouver WA, Wayne (Elizabeth) of Troutdale OR, Marty (Esther) of Milwaukie OR, brother Kenneth of Canby OR, 12 grandchildren and 13 great-grandchildren.

A private family graveside service will be held at Willamette National Cemetery.

A private family service will be held at Willamette National Cemetery.