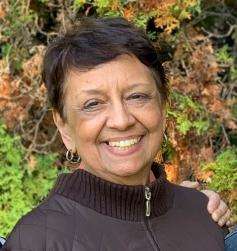 Mary Jane Cooper passed away on January 2, 2020.  She had retired from her longtime work with Wycliffe Bible Translators and was living in Gresham, Oregon, with her husband, Russ Cooper.  She had been fighting with an incurable cancer, called a leiomyosarcoma for more than three years, and she was 71 years of age when she passed away.

Childhood Years: Mary was born to Craig Leonard Kennedy and Genevieve Betty (Pontes) Kennedy in Santa Monica, California, on March 7, 1948.  Her father had been a civilian employee at Pearl Harbor at the time of the attack, and served in the US army during the war, then her parents had moved to the mainland from Hawaii after World War 2.  Her mother gave birth to two additional daughters, Carol and Leilani, but had passed away when Mary was three and a half years old.

Mary spent most of her growing up years in Lakewood, California, graduating from Lakewood High School in 1966.  Her father had worked for Rockwell Aviation’s space program, and did electrical wiring on early satellites, the Apollo Mission space capsules as well as the first generation of space shuttles.

In Hawaii: She met her husband-to-be, Russell E Cooper, in Hawaii, because he was attending the Kaimuki Church of the Nazarene while doing his graduate studies in linguistics at University of Hawaii, Manoa, as an East-West Center Grantee.  When she moved to Hawaii to live with her grandfather after high school, the Church of the Nazarene Headquarters send her new address to the Kaimuki Nazarene church as a “moving members” service.

Russ was teaching the adult Sunday School class at the Kaimuki church, and she became one of his students.  [He remembers her getting his attention by crumpling up a Sunday School paper and stuffing it down his neck.]

After their marriage at Kaimuki church on June 9, 1967, that summer Russ did additional studies at University of Michigan then they returned to University of Hawaii in the fall where Russ continued his graduate studies and Mary continued working.  During this time, Russ did field work in Papua New Guinea, while Mary continued with a then full time job at Ala Moana Center at Long’s Drug Store, the highest volume store in the Mall at that time.  She also began taking college classes during this time, continuing them over the years at various locations.

Marion, Indiana: Mary continued taking classes part time when they moved to Marion Indiana, in 1970 where Russ taught English and linguistics courses at Marion College (now Indiana Wesleyan University) until 1977.  Two daughters were born during this time, Collette and Maureen.  At the Eastview Wesleyan Church in neighboring Gas City, IN, she and Russ led children’s various church ministries from approx. 1970 through 1979.

While in Marion, Mary achieved the level of “Supervisor” with the Shaklee Corporation selling natural vitamins and other Shaklee products, while Russ later worked at AA Rents for two years.

Ogilvie Church and SIL Training:  The Coopers pastored the Ogilvie Wesleyan Church (Evart, Michigan) from 1979-1983. They were mentored by a Child Evangelism Fellowship team, and further developed their skills in working with children’s ministries. She was involved in Good News Clubs ®, in Monday School for preschoolers, and taught children’s church during this time, and was especially blessed to see all of the children in this ministry make decisions to accept Christ as their Savior

In 1981 while continuing to pastor the Ogilvie Church, they attended their first summer session at the University of North Dakota’s Summer Institute of Linguistics [SIL] program, and in August 1981, they were accepted as members of both the Summer Institute of Linguistics and Wycliffe Bible Translators.  Mary continued taking classes for two additional summer sessions while Russ taught in the linguistics program there, and they continued to pastor at Ogilvie Wesleyan during the rest of the year.

They finished their pastoral ministry at Ogilvie in June 1983, and doing further studies at North Dakota SIL and at Dallas SIL in the fall, they were then assigned to work in Papua New Guinea, arriving there in 1984.

With SIL in Papua New Guinea: They were allocated to work with the Buhutu [boo-HOO-too] language group in January 1985, with whom they have worked to this day.  On the translation side, she not only helped with the Bible translation but also typed up thousands and thousands of verses of handwritten scripture manuscripts. Her specialty was in literacy, facilitating the writing and production of hundreds of titles in the Buhutu language, and she was particularly pleased with her Buhutu Primers and the Buhutu Recipe Book which she co-authored with her dear PNG village neighbor, Bessie B.  She also co-authored academic papers and articles on phonology, anthropology and literacy, and was administrative secretary for the “Technical Studies Department” (i.e., country-wide, academic training programs) at the SIL Center at Ukarumpa in Papua New Guinea when her husband, Russ, was the director of that department under three directorships.  In PNG, she exercised her Beauty School training by cutting hair, and taught hair-cutting skills to co-workers.

Mega-Survey: One of the strategic turning point accomplishments for the region was to for her to be one of four teams leaders in a large mega-survey of 18 mainland Papuan Tip languages in 1997, to determine possible need for translation and literacy programs.  Her  survey team travelled by a small coastal vessel, by dingy (speedboat), by outrigger canoe, by truck and by foot and surveyed seven languages: Wagawaga, Gamadoudou, Garaghwahi, Maiwala, Topura, Taupota, plus a very small language called Gweda which had only one extended family still speaking it when they encountered them (so is probably extinct by 2020).  Since the mega-survey, the other six languages have successfully initiated their own language development and translation programs.

During her academic career she was also a teacher’s assistant in Literacy at the Oregon SIL program at the University of Oregon in Eugene, Oregon, and at the South Pacific SIL in Kangaroo Ground, Victoria, in Australia.

Gresham, Oregon: Upon the Coopers’ return to the USA, Mary worked for 6 years at Gresham Manor Retirement Home, and also as a beautician at the Oregon Trail Center Perfect Look and at the Beauty Salon at Gresham Manor.

While having fun times with the children and grandchildren, among other activities, she made a number of trips to Gleneden Beach on the Oregon Coast.  Hobbies and personal interests involved numerous adult education classes ranging from cake decorating to memoir writing to exercise groups, including yoga, line dancing, Irish dancing, and even a bit of ballet!  She studied under a lady artist who became a personal friend, and she did paintings in various media, also card-making, quilling, sewing and quilting and other handicrafts as well as her flower gardens at home and church, and enjoyment found watching her hummingbirds and other bird visitors.  In later years, one of her very meaningful ways of serving others was by telephone, talking frequently with many personal friends and encouraging them.

[In one of her writing classes some years ago she did a spoof about her own future demise, in which she projected that she would die at 89 years of age (in 2037) surrounded by her then 94 year old husband, her children and grandchildren, numerous great-grandchildren, and 20 great-great-grandchildren. She also taught a group of senior adults about planning for their future deaths.]

She was preceded in death by her parents, Craig Leonard Kennedy and Genevieve Betty (Pontes) Kennedy, by a half-brother Timothy and a half-sister Ellen, and is survived by sisters Carol (Don) Lindboe, and Leilani (William) Sigeske, as well as three additional siblings Cathy, Tonya and Michael Kennedy

A Memorial Service will be at the Springwater Church of the Nazarene, at 3444 SE Hillyard Rd, Gresham, Oregon conducted by Pastor Glen Weatherly at 11:00 a.m., on Saturday, January 18th 2020.  Interment of her cremains will be at Cherry Valley Cemetery (Avondale, Michigan), at a later date.

In lieu of flowers, contributions may be made to Cooper’s ministry with Wycliffe Bible Translators, to Nazarene Compassionate Ministries, or to the family.