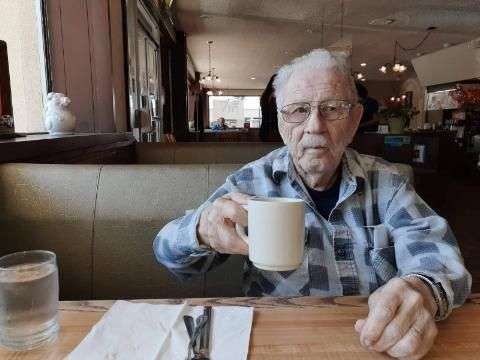 James LeRoy Roberts, Sr. was born at Mercy Hospital in Council Bluffs, Iowa on March 26, 1928 to his parents Merrill and Edith (Headley) Roberts. While in Council Bluffs, Jim attended several grades schools and graduated 8th grade from “Ave. B” school. His father Merrill, when not on W.P.A., worked in greenhouses as an expert with flowers, mostly roses and carnations, until 1943 when he saw an advertisement from Henry J. Kaiser needing help in his Portland and Vancouver shipyards. Jim’s mother Edith, who hated the Midwest Depression, took her children by bus, and headed west to follow her husband, with hopes to keep him from returning to Iowa altogether.

In 1945, Jim joined the Merchant Marines. He sailed many places for five years, including Japan, England, and France, before returning home in 1950 and ultimately meeting and falling in love with one heavenly, beautiful girl named Ruth Anna Stephenson. That same year, on October 7th, the two were married.

In the same month that Jim married the love of his life, he also received a “greeting” from “Uncle Sam,” drafting him into the U.S. Army. He was processed at Fort Riley, Kansas, proceeded to basic training at Camp Polk, Louisiana, continued advanced training in Japan, and saw action in Korea with the 180th Regiment of the 45th Division. He returned home and was honorably discharged on July 24, 1952.

Upon returning home, Jim needed a job to support his bride, but it was delayed until speaking with a fellow soldier whose uncle worked at Esco Corp. Jim landed a job there, and even received his GED while working there through a funded program. After 40 years, 1 month, and 9 days at Esco Corp., Jim retired in 1993.

Jim’s number one love was his family and his loving, caring, beautiful wife of 59 ½ years, Ruth Anna. Together they had seven children, and they lived and loved until her death on April 24, 2010. Now, they are together for eternity.