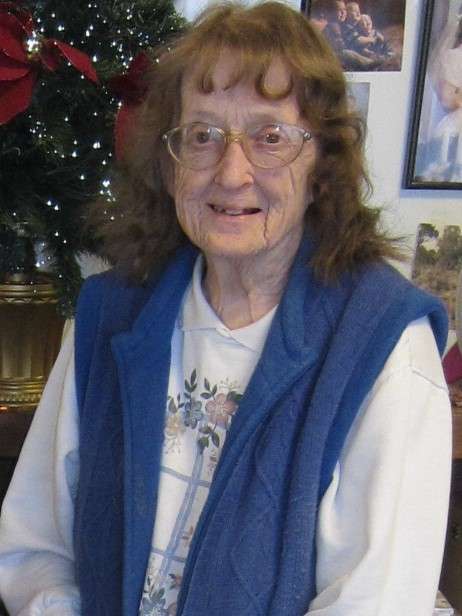 Our mom attributed her long life and good health to eating an apple every day. In the end, an apple a day wasn’t enough to slow down the effects of dementia and aging. After nearly 98 revolutions around the sun, Ella’s journey on earth ended peacefully on the morning of September 6, 2020. Where do you even begin to sum up a life in a few inches of newsprint?

Ella Agnes (Berg) Strohmaier was born in Ketchikan, AK, on Nov. 18, 1922, to Ludwig and Louise Marie Berg. Ella, her siblings (Louise, Dorothy, and Carl), and mother, subsequently lived in Tacoma, WA, while Ella’s father remained in Alaska. Her mom died of multiple sclerosis in 1932. After remarrying, Ludwig brought the children to Sitka, where he operated a fish packing business. A few years later he moved the children down to Portland, OR, where they more or less fended for themselves while their father and stepmom remained in Alaska. This tough period shaped Ella’s formative years and left an indelible impression on her.

She attended Girls Polytechnic High School in Portland, graduating in 1943 and marrying Ed Strohmaier that same year. They had four children: Susan, Sandra, Ed, and David, spread out over twenty years. The family lived in Portland, Molalla, and, eventually, Crooked River Ranch, OR, where Ed, Ella, and David moved when Ed retired in 1979. Mom eventually moved to Redmond after Ed died, and then to Gresham, OR, to be closer to family once maintaining her own home became too challenging.

Ella was proudly independent and generous, marked by helping her own kids in 4-H, teaching Sunday School or sewing, participating in Extension club, or accompanying children on school band trips (sometimes to the great embarrassment of her kids given Mom’s propensity for unfiltered remarks). Likely one of her greatest claims to fame was her baking. She took such pride in her baked goods that she frequently shared recipes with complete strangers, be they in her hometown of Redmond (especially Fred Meyer) or while traveling on buses and trains to visit her children. Blueberry muffins or chocolate “turtle” cookies were two favorites that she propagated across the West.

She came from an era where keeping voluminous photo albums was typical, writing on the back of each photo a date and what was depicted. Her amateur photography sometimes got the best of her. On one trip with her kids to Washington, DC, in the early 1990s, shots rang out in front of the White House where she was getting ready to take a tour. Instead of ducking for cover, she reached for her Instamatic camera to capture the moment in Kodachrome!

Red, white, and blue were her favorite colors, being enamored with the 1976 Bicentennial. She was also a collector. She collected anything that had the date 1976 on it—be it pennies, postmarks, or newspapers. She was a rock hound, too, which necessitated moving hundreds of pounds of obsidian, thundereggs, and petrified wood from her Redmond home when she moved into an assisted living facility. And she also collected hundreds of decorative spoons from places around the globe that she visited either vicariously or in person. When the family home in Molalla burned down in 1977—a defining moment for Ella—it left a pile of smoke-tinged family heirlooms and National Geographic magazines. Some of the heirlooms remain in the family; the National Geographics, after multiple moves and a few slipped discs, were finally delivered to a local landfill.

The year 2020 has challenged all of us in this nation. Due to the pandemic, it was not possible to visit Mom in person until near the end of her journey. Some of her final words were, “I’m trying to remember.” We’ll never know precisely what she was trying to remember, beyond, perhaps, the disjointed images and memories that result from dementia, intensified by the fact that she was our resident family historian who prided herself in remembering details of family lore. But that’s okay. We’ll remember for her. Always.

Ella was preceded in death by her parents, siblings, and almost all her friends, who she outlived. She is survived by all her children and 7 grandchildren and 4 great grandchildren. A special thanks to Ed and Marsha Strohmaier and family who watched over Ella during her final years. Also, we are grateful for the care and love shown by staff of Pacifica Senior Living Portland and Brighton Hospice. Due to COVID-19, a celebration of Ella’s life will likely be held sometime in 2021, offering an array of Ella’s favorite delicacies such as Hershey’s Kisses, Coke, candy corn, apples, turtle cookies, blueberry muffins, and other treats that would be frowned upon by your dentist. In remembrance of Ella, we encourage gifts be made to Brighton Hospice, OR, 8050 SW Warm Springs St., Suite 205, Tualatin, OR 97026.