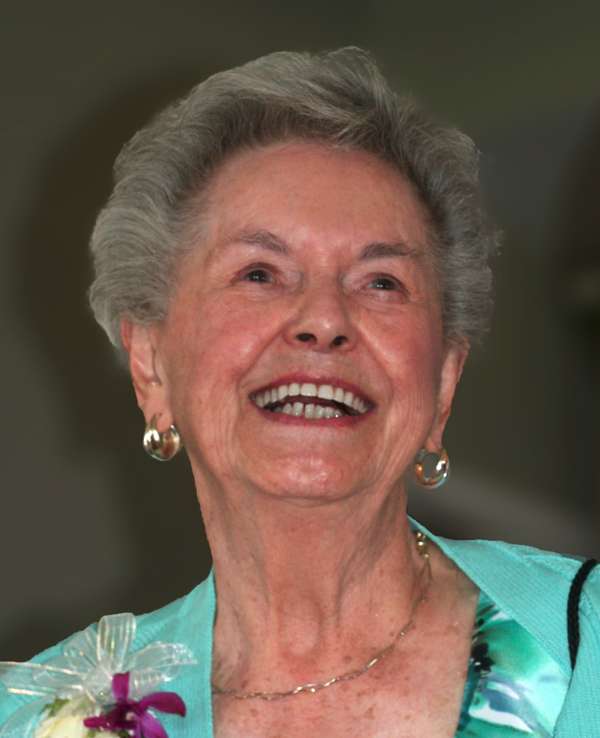 Dorothy Lavell Harding was born to Esther (Emerson) and A. H. “Bill” Harding in Walla Walla, Washington. She grew up in Portland, graduated from Franklin High School and attended the University of Oregon.

Dorothy married Lt. Col. Walter A. Ferris on March 26, 1944 and was by his side during an Air Force career that took them to posts in the Philippines, the Azores, Michigan, Colorado and California. Following retirement from the military, they enjoyed life in their lakefront home on Interlachen Lane in Fairview until Walt’s death in 1995. Married June 18, 1999 to Cyril F. Butterfield, she was blessed with 15 years of loving companionship, travel and family gatherings.

Dottie was a dedicated volunteer for decades, serving charities including Albertina Kerr Centers, Shriners Hospitals for Children, Doernbecher Children’s Hospital, SnowCap Community Charities, The Salvation Army and American Red Cross. She worked for several years at Reynolds High School and was a member of Smith Memorial Presbyterian Church, the Order of the Eastern Star and Daughters of the Nile.

Preceded in death by two loving husbands, her sister Barbara Byhre, and a granddaughter Allison Ferris, she is survived by sons Mark and Scott (Linda) Ferris; grandchildren Emily (Alan) Rousseau, Tyson (Kara), Jeff, Chase (Jessica) and Kirk Ferris; two great-grandchildren and many nieces and nephews. In her many roles as wife, mother, grandma, aunt, friend and volunteer, the positive impact on the lives of all she touched is immeasurable.

A memorial service and celebration of life will be held at 2 p.m. Friday, November 30, at Smith Memorial Presbyterian Church, 2420 NE Fairview Ave., Fairview. She will be laid to rest with Walt, her husband of 52 years, at Willamette National Cemetery in a private graveside committal.

In lieu of flowers, the family suggests donations to Albertina Kerr Centers (www.albertinakerr.org) or another of the charities served by Dottie during her lifetime of kindness and giving.