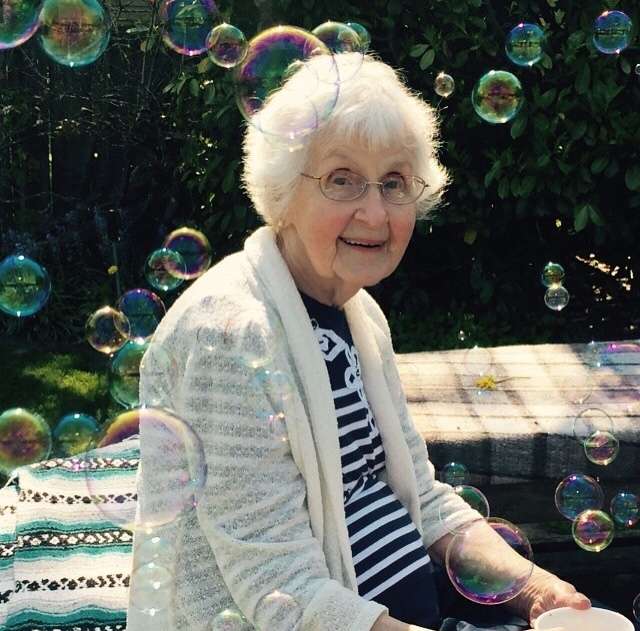 Colleen Ranger was born in Beaverton, Oregon in 1931 to William Ranger and Dorothy Campbell.  She had three brothers and one sister; William, Donald, Lila McLain and Tex.  Colleen graduated from Franklin High School.  Colleen met Leo Benfit at Carver Park during an outing with friends.  They were married at St. Ignatius Catholic Church on July 23, 1949.  They raised their family of eight children in St. Peter’s Parish, located in Southeast Portland.  Their eight children gave Leo and Colleen 24 grandchildren, 32 great-grandchildren and 1 great-great-grandchild.  Colleen was a homemaker and devoted wife and mother.  Colleen enjoyed spending time with her large family and keeping up with them on social media.  She loved using emojis and never missed mailing a birthday or anniversary card to her kids or their kids.  She also enjoyed sewing, gardening and always had the most beautiful and envied garden of flowers and shrubs on the block.  She is survived by her children Paul (Sue), Janet (Greg-deceased), Joe, Greg (Kathy), Pete (Sara), Diane (Mark), Steve (Karen), Carol (Shaun), grandkids, great grandkids and great-great grandkids, her sister Lila and brother Tex and dozens of nieces and nephews. She was preceded in death by her parents, her husband Leo in 2015, her brothers William and Donald and grandson Ethan and great grandson Leo.  Colleen has been a resident of Gresham since 1978 and a longtime member of St. Henry Catholic Church.  Rest in peace, momma.  We will all miss you terribly.

Contributions may be made to American Heart Association or National Autism Association.

Services for Colleen Benfit are private, Thank you.