We are family owned and long-time participants in the community. When a death occurs in your family, you can take comfort in knowing that the staff members at Gresham Memorial Chapel are reliable members of the community and a resource you can trust.

John graduated from Reynolds High School in 1971, and married his highschool sweetheart, Sandy, in 1973. In the early 70’s he attended MHCC for two years and began a banking career, in 1977, he completed the Funeral Service program at Mt. Hood Community College. He began his now 35+ year funeral service career working for Lou Carroll at Carroll Funeral Home, Finley’s Sunset Hills, Bateman-Carroll (when it was family owned), and managed Portland Memorial Funeral Home and Mausoleum.

Andrea started her funeral service career right out of high school, as an apprentice for Driskill Memorial Chapel in John Day, Oregon, where she grew up. After three years of experience, Andrea attended the Mt. Hood Community College Funeral Service program. She served her funeral service internship with Gresham Memorial Chapel and was hired on full time after graduating from Mt. Hood Community College in 2003. Andrea became part of the family when she married John and Sandy’s son, Nick Gerbish, in 2006.

Jennifer was raised in East County and is a graduate of Sandy High School. She enjoys spending time with her family. 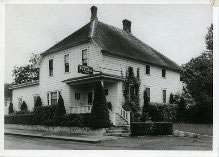 Gresham Memorial Chapel was originally a private home, owned by Boone and Hanna Johnson. After Boone’s death in 1916, his house was sold to Edna and Charles Gates, who built a funeral chapel just north of, and adjoining, the house. William C. and Anna Carroll purchased the business in 1930, and added a new chapel on the south side of the old house in 1955, after a fire damaged the original chapel. William’s son, Lewis (Lou) Carroll, continued with additional remodeling until 1986. In 1988 the funeral business, having merged with Gresham’s other funeral home (Bateman’s), moved to West Powell Boulevard, and the old Carroll Funeral Home was completely remodeled as a wedding chapel, reception and banquet facility, Parkside Wedding Chapel. At that time both were owned and managed by Stan Morris. In 1998 John Gerbish turned Parkside Wedding Chapel back into a funeral home, doing extensive remodeling to add a room for embalming and a refrigeration room, and opened for business as Gresham Funeral Chapel, changing the name to Gresham Memorial Chapel in 2005.